Author Stephanie Kelton’s main point in The Deficit Myth is that federal deficits are not only harmless but highly desirable as devices to accelerate economic activity and resolve economic inequality. She’s wrong. 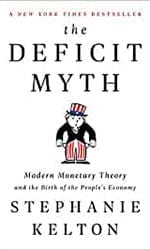 Creating money doesn’t burden future generations, she writes, because there’s nothing to repay. Entitlements such as social security can be sustained forever. To achieve full employment, the federal government can offer a job guarantee to anyone who wants work but can’t find it in the market economy.

This idea is supposed to be a new take on modern monetary theory (MMT). Nobody is sure when MMT was devised (somewhere between 1920 and 2008), by whom, or exactly what parts are at its core and which are later add-ons.

But this new twist on MMT argues that deficits don’t matter, that government surpluses are counter-productive and potentially disastrous, and that there’s no reason to restrain government spending. It also argues that free medical care and free university education (among many other emoluments) can be easily provided for all, climate change can be arrested and economic disparity removed.

It also suggests central banks should be eliminated or converted to government departments or parts of national treasuries, and governments should have the power to issue currency directly with no middleman. All it takes is a different mindset.

FROM THE ARCHIVES: We can’t dodge deficits and debts forever by Roslyn Kunin

In the sense that ‘modern’ monetary theory is reasonably expected to be new, there’s nothing new about it. It has been thoroughly tested numerous times. In Germany in the 1920s, banknotes were excessively printed before explosive inflation made them valueless.

MMT acknowledges that additional economic demand caused by larger-scale government deficit spending could raise inflation, but it has no coherent advice on how to control it. This comes closest to admitting that there must be limits to printing money.

Given that supplementing tax revenue and debt with printed money has been a widespread practice for generations, then for all anyone knows, the methodology of printing money is already being employed to its safe limit.

Kelton brings up the example of Japan, which has had many years of stunning public deficits and a debt that’s 265 per cent of gross domestic product without inflation.

She apparently can’t explain why this is so but accepts it as evidence that massively increased deficits wouldn’t necessarily create inflation problems. This seems to be her central innovation.

This book is a sensation in certain circles because it makes the elaborate case that unpleasant natural laws can be negated by sophisticated, creative inventions of economic theory. Something can be made out of nothing. This is the new alchemy, a 21st-century version that doesn’t even need dross to be converted to gold. Gold can be created out of paper, or by bits and bytes in computers.

Recently, the Trudeau government released its economic statement, which showed how close we are already to an MMT style of fiscal management. The deficit for 2020-21 will be between $380 billion and $400 billion, more than 10 times what was considered unacceptably large until now. Approximately half of current federal government cash needs are being provided by the purchase of treasury securities by the Bank of Canada for dollars out of thin air.

This is how the government’s lavish giveaways to vote-rich demographics in the name of COVID-19 support are being financed. Statistics Canada calculated that federal income support works out to nearly $7 per $1 of actual income loss. The personal savings rate is soaring right along with the deficit.

The government continues to insist, and some so-called economists agree, that federal debt relative to GDP is the lowest in the G7 group. That’s only true if provincial deficits and debt are irresponsibly disregarded. It’s one country, one taxpayer population and one GDP.

Morris Dorish is a research associate with the Frontier Centre for Public Policy.

Morris is one of our Thought Leaders. Why aren’t you?